Thank you for your years of service to the community 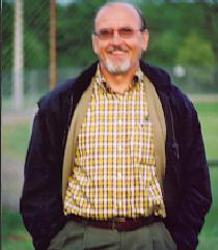 Paul's been around the Hamilton soccer scene for many years, coaching, convening you name it. He is currently on the Club Executive committee and does work with the OYSL and SRSL for Hamilton Sparta. Paul loves a good conversation. Next time you see Paul ask him What's New?

At the recent Hamilton & District Soccer Association AGM, Sparta’s PAUL GESSE was awarded the Alex Fotheringham Memorial Trophy  for his longstanding contribution to the game of soccer. Paul has served as a coach and executive member of Hamilton Sparta for the past 15 years. He is currently the club vice-president and coaches our senior mens team in the Ontario Regional Soccer League. He is also the president of the Hamilton &District Multi-Jurisdictional Developmental Club League, and serves on the executive of the South Region Soccer League and the OYSL. He is a true builder of the game in this district, and his tireless commitment makes him a very worthy recipient of this prestigious award. Congratulations, Paul